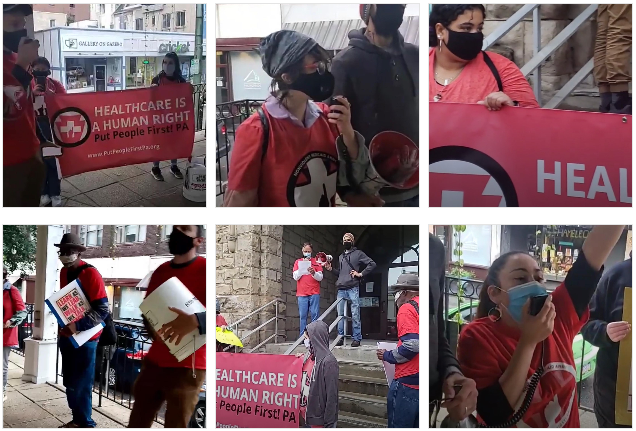 Today we brought our demands to City Hall, we gave them this letter:

The Johnstown Healthcare Rights Committee of Put People First! PA is alarmed at City Council’s plans to hire more police officers and increase the JPD budget by $500,000 over the next three years, half of which will come from city coffers.

What is the rationale for increasing the size of our police force when our population has been shrinking for years? Where will the city come up with the $250,000 for the new officers, when the city can barely balance its budget each year and has been in the Act 47 program for nearly 30 years? City Council just voted to remain in the program until 2023, does this city ever intend to exit Act 47?

Why would the city try to hire more police officers when the JPD complains about not being able to find good recruits? Why would the city commit more resources to a department with a track record of systemic racism and excessive force, including the killing of Elip Cheatham in 2012 and the beating of a mentally ill elderly man this summer?

If the city has the money it should be used to ensure that when someone calls 911 about a mental health crisis, mental health professionals respond, not cops with guns.

The people of Johnstown do not want more police officers. We had historic protests against police violence and systemic racism this summer after which City Council approved a mural that says “End Racism Now” on the street. If you want to back up those words with actions, do the right thing: Cancel the plans for more cops, give back the DOJ grant, and put that $250,000 into mental health resources for our community.