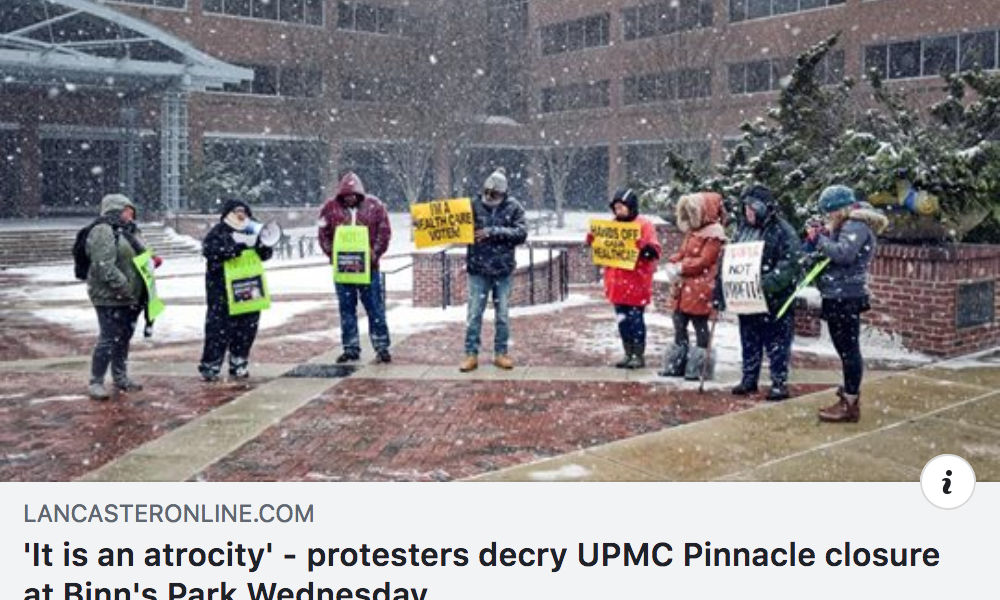 WHAT:    Lancaster members of Put People First! PA, a grassroots, statewide organization of people directly impacted by the healthcare crisis, will call for immediate action from our county commissioners regarding the closing and demolition of UPMC Pinnacle Lancaster Hospital, located at 250 College Avenue, by rallying outside County Government Center.

Since the December 18th meeting of the Lancaster City Council, the slated closure of the UPMC-Pinnacle hospital has begun to raise alarm in our community. On December 23, 2018 the LNP Editorial Board wrote, “We think there ought to be more important considerations than a health system’s bottom line…. It’s not asking too much to have some choice in where one gets one’s health care. But increasingly, we are being left with fewer choices — and no way of changing that reality.” (1)

“Closing this hospital will hurt those of us who are already struggling. Lack of access to healthcare services lead to health issues, leading to job loss, homelessness and poverty, making this a crisis we can’t ignore. We must stop UPMC Pinnacle Lancaster from closing until our concerns are addressed. We need to hear that our elected representatives care about our well-being ,” stated Tammy Rojas, member of Put People First! PA and Coordinator of the Lancaster Healthcare Rights Committee during City Council Meeting on December 18, 2018. (2)

These closures illustrate the need for an office of the Public Healthcare Advocate’s the State Government who can advocate for all Pennsylvania residents who are at the mercy of for-profit healthcare providers, an issue that Put People First! PA has been raising across the State.