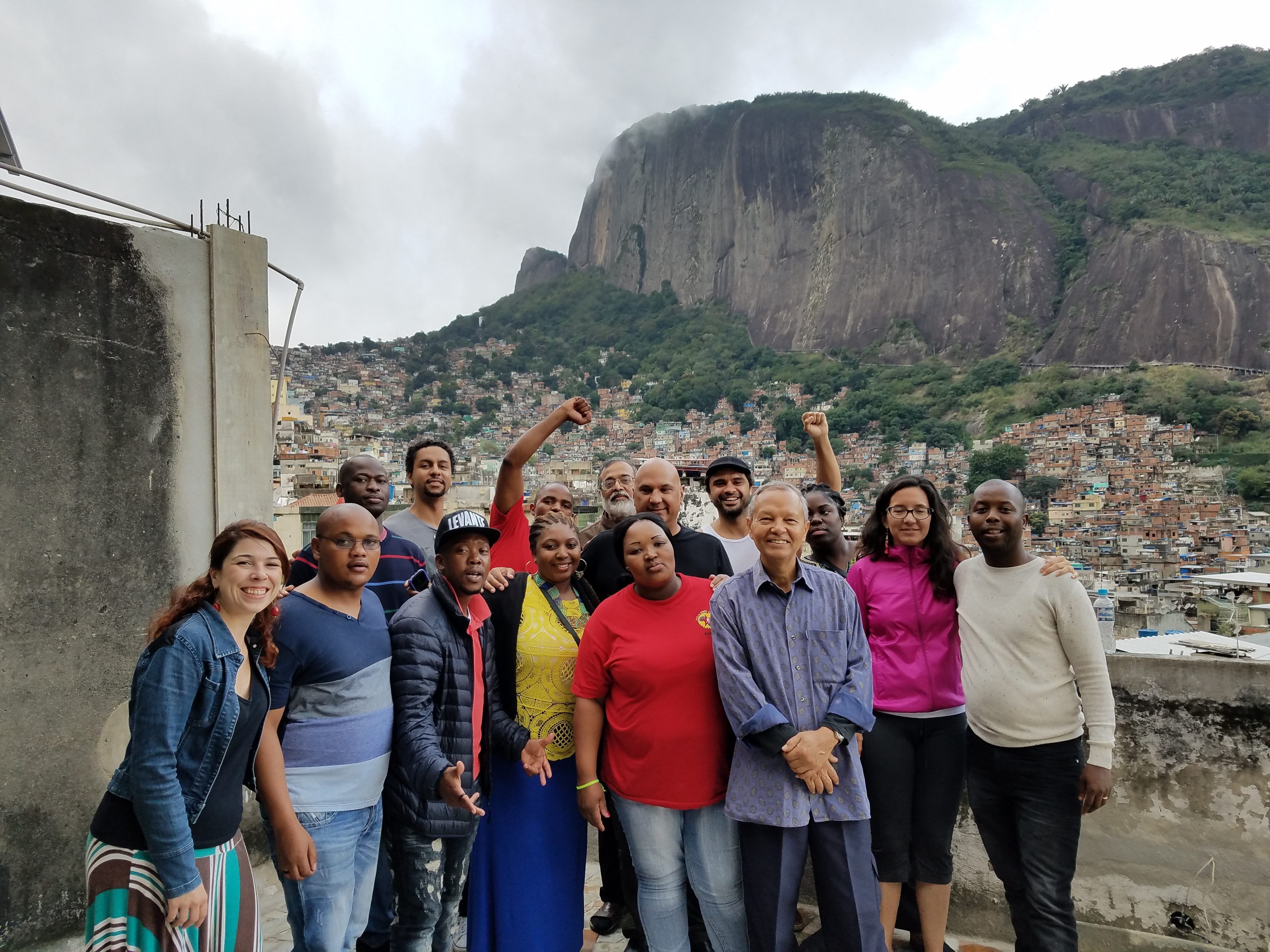 Recently, on an especially lackluster day while I laid in the fetal position in bed and contemplated life, I received a text from a fellow PPF member, “Hey Eboni!  I hope all is well!  Would you have some time to talk later about the possibility of going to Brazil to attend an international convening for youth in social movements? Everything would be paid for through our partners.”  I’m thinking that this had to be yet another sick and twisted practical joke from the universe. It wasn’t. Two weeks later, I was at the Rio de Janeiro Airport, out of the country for the first time.  I felt like a 5 year old in the mall who’d lost her parents. It was massive, no one spoke English, and I still hadn’t received instructions about next steps from my host. I was frantic.

Roger from the Media/Communications team, and I were hosted by the Landless Worker’s Movement (MST), the largest movement organization in South America. Despite the mission presented to us, I could never had guessed what this trip had in store for me. Even as I write, I am still in awe and disbelief.

By 9 pm, I was finally with my host and the next few days felt surreal. We flew to Bahia in Salvador to meet with Landless Workers staff and others involved in movement work.  Bahia was colored with a pro-black sentiment. The people covered all the aesthetics of people in the diaspora. I could go into any space and feel like I belonged. In Philadelphia, I often have to prepare myself to overcome people’s projections about me, being a poor black single mom, as I navigate in and out of various spaces. I am often permanently injured by these projections. They are often rooted in white supremacist ideologies and carried out by blacks and whites alike, whether conscious or not. I never get a chance to heal. It is like an abusive relationship that I am bound to forever.

In fact, people would often approach me speaking Portuguese. Danny Glover’s wife, who is Brazilian, asked me if I was Brazilian (Back to that later). I was quickly reminded by their attempts at conversion of how much I missed black people back home, this surprised me considering that I’d never had a chance to realize that I had something to miss. Our histories nearly identical our journeys distinct evidenced by language, music, and culture. We have much to learn from each other but this experience definitely sparked a newfound curiosity and appreciation for the nuances and idiosyncrasies that is African American culture. After all, it is mine and I yearn to fall in love.

We toured the city and quickly developed a genuine rapport with our Brazilian comrades.  We visited three cities during our stay, Rio de Janeiro, Salvador and Brasilia. Most cities are relatively modern, with dilapidated old world style buildings in the mix, giving the city charm and character.  The weather was cool, though it alternated between warm and chilly constantly because it is winter there in June. Hills were steep and plentiful in many places around the country. We had a joke in the group, “Now we know how the women here got those highly coveted backsides!  Brazilian Butt Lift anyone?”  We drank too much, made inappropriate jokes and no one was offended. We danced to Samba, witnessed an Oshun ceremony and drank coffee in princess tea party sized cups, not cool!

On day three of our expedition, I learned that we would be meeting with the President of Brazil, Dilma Rouseff. We had an intimate meeting with the president that included three of her advisors, Danny Glover, goodwill Ambassador of Brazil, Danny Glover’s wife and political advisor, Roger, Erica Williams of the Poor People’s Campaign and yours truly. We were there as the American Delegation to support Brazil’s Democracy during the president’s pending impeachment.

It was not at all even in my peripheral that I would meet the leader of Brazil up close and personal, or Danny Glover for that matter. Is it bad that I was more excited to meet Danny than the president?  I knew you’d understand 🙂  I was suddenly thrust into one of Brazil’s defining historical moments not fully sure what it meant for the fate of Democracy in Brazil, our organization or me, as an individual.

I informed her of the challenges with democracy in the US including the different ways that the most vulnerable citizens are kept from voting and our Electoral College process which limits the impact of voters. She seem astonished and made lengthy and passionate statements on how such a process could never bring about real change. I added that a threat to democracy anywhere is a threat to democracy everywhere, the reason we are driven to stand in solidarity with the people of Brazil.

Four days out of our 10 day trip, we stayed at a small local school where the youth conference was being held.  It was hard to follow what was going on, despite translation equipment and to engage with non-English speaking comrades (90% of attendees). We slept on the floor, ate on the floor and had to use deplorable bathrooms. The school didn’t have Wi-Fi and I was unable to communicate with my family, like I had done the majority of the trip. Despite my physical and material discomfort, I learned that common people from all over the world had similar struggles from educational inequality, unemployment, poverty, street and police violence, etc. We talked a great deal to exchange strategies, create an international youth in movements manifesto, and identify ways to build an international coalition. I’m expecting to receive an email from the event organizers that sum up the conference and provide next steps.

On the last two days of the trip we met a local of Rio. He invited us into his home to get a better view of the favelas, an urban slum originally occupied by former slaves. The houses are built on top of one another, high up on the mountains. Someone asked him how the living arrangement were made possible. In other words, “How did people initiate and maintain living on top of each other.  Favelas were developed by the people, not the city, and lack proper infrastructure. Truth is, the answer should be obvious, but depending on where you live in the world, working through such an arrangement could be challenging socially, legally or just plain impossible.

He explained that people worked together to create an agreement and helped each other to build the new house. As an incentive and thank you, the new neighbor would throw a barbeque on the day that the roof got installed.

He also told us that they hadn’t paid for electricity since the 1990s. Before then, the state produced electricity for a nominal fee until the service was privatized. The rates skyrocketed, most people couldn’t afford it and eventually stopped paying. The grid was left intact. The power company wouldn’t send their technicians out to disconnect the service in fear that their heads would get disconnected from their bodies. According to reports, Rio became one of the most dangerous cities in the world after it was taken over by street gangs.

Essentially, they are stealing electricity. Stealing is wrong, using violence to facilitate stealing is wrong but what shall we call charging vulnerable citizens predatory fees for a basic necessity for no other purpose than to become unjustly enriched?

Our governments create poverty with their failed policies and then our corporations punish us for being poor with their greed, the world over.

“The relationship between the population of the favelas and the power distribution company was governed by a mutual lack of trust. People risked their lives to steal energy and did not take into consideration consumption levels. For the local company, these potential customers were responsible for the high level of losses and default. The social contract was broken.  To revert this vicious circle and reconstruct a stable relationship, the first step taken by the company was to call for regulatory incentives that could make energy bills affordable. The federal government developed a regulation targeted at low income populations through which local companies had to invest 0.5% of the annual operating income into “energy efficiency programs.”

It’s easy to conclude that losing revenue has prompted the power company to create incentives to make energy affordable. Could energy have not been made affordable to begin with? We know that it could have just like we know that we could have quality education, housing, jobs, and universal healthcare.

The social contract is broken when corporations and government fail to properly protect and serve the people that need it most. Having an adverse reaction to inequality is as natural as breathing in air, the human spirit is ever striving. This reality seems ever lost on the most powerful among us. This trip has recharged my battery. I saw light at the end of the favela, thanks to the people!