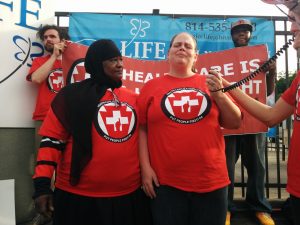 Two visions were on the table in this election:

One, an America that uses words like “freedom” and “liberty,” but takes us back to a time before social movements won civil rights for women, black people, LGBTQ people, disabled people and others.

The second, an America where anyone can get ahead no matter your skin color, gender or sexual orientation, just as long as you work and try hard enough.

But neither of these visions fits the reality that we, as everyday people, know: People are struggling with poverty and economic decline, from every racial and ethnic background, every gender, every ability and every religion, from rural and urban areas. These struggles come from forces and systems we cannot individually control: the changing global economy, lack of family sustaining jobs, environmental devastation, immigration, discrimination, police and military violence, incarceration, and corporate greed, among others.

The two visions are false choices. But Put People First is creating new choices. Put People First believes that Pennsylvania can have a future in which poor and working-class people come together across all lines of division. If we unite, share our stories, and commit to our struggles and each other, we can take powerful action to change things. We, the everyday people of Pennsylvania, can shift what is politically possible.

Our formula is simple. We unite around our basic needs and see them as human rights. We bring together people who’ve never been brought together before. We wrestle with our assumptions. We build community. We love each other.

We are the ones that we’ve been waiting for. When we’re united, nothing can stop us. Join today.