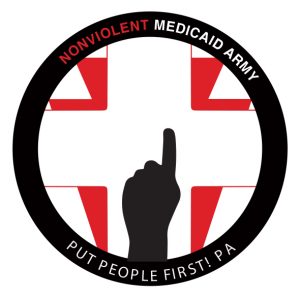 Are you on Medicaid/welfare insurance?

Do you need Medicaid/welfare insurance but you’re unfairly excluded from it?

Join the Nonviolent Medicaid Army! Sign up using the form below.

The Medicaid Army fights nonviolently to hold power holders accountable to defending and protecting Medicaid. We won’t accept any cuts or jumping through hoops to access Medicaid. By fighting for Medicaid, we fight for the right to healthcare for all.

Enough is enough! Every year, politicians at every level across party lines try to make cuts to Medicaid. Why would anyone who has great healthcare paid by our tax dollars want to punish families who are just trying to make ends meet? Maybe because they think it will be easier for them to punish the poor than take from the rich. We’re not having it.

Are you working and sick and tired of hearing the claim that people on Medicaid don’t work?

Do you need better dental care?

Join the Nonviolent Medicaid Army today and take action with Put People First! PA to put the powers that be on notice!