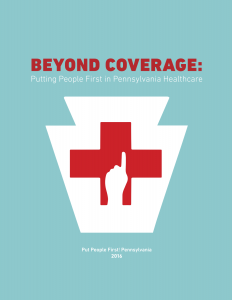 This report, Beyond Coverage: Putting People First in Pennsylvania’s Healthcare System, tells the story of our state’s health care system from the perspective of the people of Pennsylvania. Through surveys of over 300 people in 43 counties and stories from five courageous individuals, Beyond Coverage reveals the critical ways in which the state’s private, for-profit insurance system is failing to deliver the health care that people urgently need.

Our key findings include:

To find out more about this report and what you can do, download the report, check out the list of actions you can take, or send us an email.

We co-published this report with the National Economic and Social Rights Initiative.