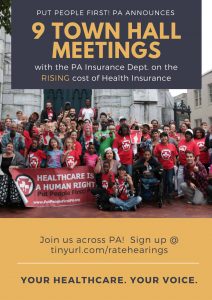 On August 14th in Altoona, the Pennsylvania Insurance Department held the second of nine promised Town Hall meeting about ACA/Obamacare insurance rate hikes. We won these Town Halls — making them an official part of the rate-setting process — after more than a year of organizing and putting pressure on the PID and insurance companies.

The Altoona Town hall was a successful gathering, with about 25 people in attendance, about 6 of us from PPF. There were several residents that learned about the meeting though a letter to the editor that was published in 5 counties, and it is clear they have some serious concerns. The insurance department answered many questions, and it is clear they are feeling pressure to take the side of the people and not the companies. Stating that, if they don’t make the adjustments (rate increases) that insurance companies have requested, it is possible the companies will pull out of the ACA completely, leaving us with no insurance companies to choose from. To us, that sounds like the insurance companies trying to hold us hostage. Still leaving with unanswered questions, that I’m not sure anybody could answer, the fight carries on.

Though I feel the Town Hall was a success, I feel there should have been more open space for individuals to speak out: too much time in the meeting was taken up with presentations and explanations from the PID, instead of with the stories and concerns of residents. I also wish that the insurance companies themselves had showed up: we wanted the chance to address them directly, so they could see how their demands and their high profits are affecting us. We continue to learn and find ways to strategize after every action and we will continue seeking the change in policy needed to win health care for every person in PA!

Something I noticed at the Altoona Town Hall was that most of the people that attended on their own were seniors, and even veterans. There were not many people there under the age of 50. I would like to encourage the younger people of this state to attend a Town hall in your area to show the Insurance Department that you care, that you feel health care is a Human Right. We can say it all we want, until we prove that it really matters they are not going to take us seriously. On that note, there were a few in Altoona that felt that Health care is not a Human Right, and this was the perfect opportunity to find out why they feel that way and challenge their way of thinking. As young people in PA, we need to stand up NOW to save the future for our children, so they do not have to suffer with the same struggles we have come to know as the norm.