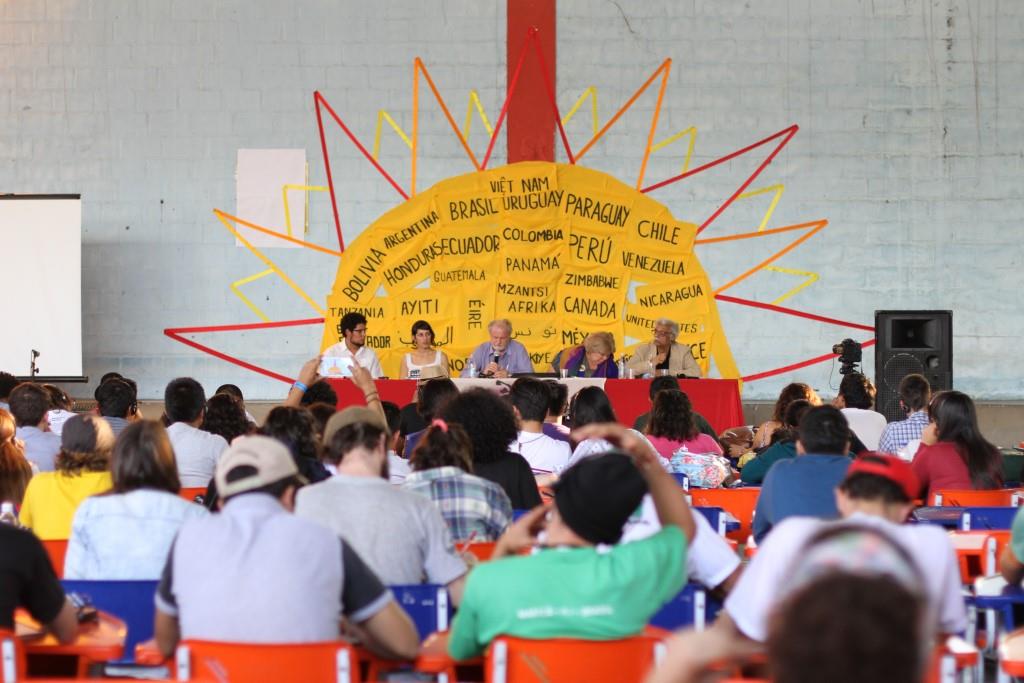 It was a once in a lifetime opportunity and journey to the other side of the world. Brazil, a vast and beautiful landscape unlike anywhere else on the planet. It’s a country of people that have deep ancestral roots and a strong connection to the culture that is borne from those roots. The land, culture, and history makes the Brazilian people who they are: People that love who they are and the country they call home. Brazil is not only rich in culture but in natural resources, it’s the world’s fifth largest economy and has the third largest oil reserve in the world. The leaders of Brazil have their eyes on the future, a future that leaves most of its 220 million people out.

I, along with Eboni Taggart representing Put People First, set out on this journey from June 16th to June 27th, with Erica Williams of the Poor People’s Campaign. We were in Brazil to connect with local organizers in Bahia, show support for the democratic process in Brasilia, and attend a youth conference in Marica, in the state of Rio.

We started our journey in the city of Salvador, in the state of Bahia which has the largest population of people of African descent outside of Nigeria. Salvador was the original capital of Brazil and its African ancestry is very apparent. We met with the Bahia branch of the MST (the landless workers movement) whose work in that state helps to establish agricultural settlements in rural areas. As well as supporting local black organizers in the city of Salvador who are involved in anti-racism work and Afro-Brazilian cultural preservation. The organizers we met with in Salvador used religion and spirituality as part of the organizing practice, it was one of the strongest ways for them to connect to their community. We attended a Candomble ceremony with the organizers, which is an African-based religion primarily practiced in Bahia. They took us took to an Afro-Brazilian Catholic church which was built by slaves in the 18th century. We also met with one of the leaders of the largest black carnival troops in Brazil in their hall. The depth of history and tradition spoke to me. Our time in Bahia will always be with me. In the blink of an eye, we went to the capital of the country – Brasilia. The current capital was founded in 1960 to bring the capital from Rio to a more central location. It was designed by Oscar Niemeyer, a Brazilian and designer of the UN building in New York City, in a brutalist/modern style. Brasilia is in the state of Goiás. Visually and socially it’s very different from Bahia, the landscape is arid with red clay like dirt and sprawling, not like the rich green and tight vibrant corridors of Salvador. There, we went to the Presidential palace to meet with Dilma Rousseff, the President of Brazil; actor and activist Danny Glover; Dr. Elaine Glover – Danny’s wife; and a member of the national branch of the MST. During our meeting we spoke about the political climate in both Brazil and the U.S. and how they intersect. Currently there’s a coup to overthrow President Rousseff, that has her in the middle of an impeachment. Most recent reports show that the claims of corruption that lead to the impeachment are unfounded. But the desire by the wealthiest 4% of Brazil to get wealthier is what’s driving this process no matter how undemocratic it is. Rousseff also spoke about how healthcare is a human right and that Brazil has universal healthcare. Our small delegation came to show support for the democratic process. Our visit to Brasilia was short but memorable. Back to the coast, in a beautiful small town called Marica on the Atlantic Ocean in the state of Rio, we joined the youth in struggle conference which was apart of the Utopia festival. The overall Utopia festival was designed to bring together the poor and dispossessed from all over the globe to meet and discuss what a future would look like without poverty, racism, sexism, gender inequality, classism, and all of the other oppressions that we face. But our group participated primarily in the youth in struggle conference, where youth from four continents met in a public school in downtown Marica to speak about, debate, and learn about the challenges youth face globally. Over four days we bonded with young organizers from all over the world. We had to share tight quarters and limited amenities, but the communal format really helped us to form strong bonds with each other, even if we didn’t speak the same language. One highlight for me was participating in a mística, which is a performance that tells your story of struggle or story of self. It can be done through song, dance, poetry or other forms performance art.

After the conference on our last full day in Brazil we went to Rocinha which is the largest favela or slum in the country, in the city of Rio de Janeiro. Rocinha is not recognized by the city of Rio as a neighborhood and has no political representation. It is home to an unofficial estimate of 200,000 people. Rocinha rests on the side of a mountain and rises to the summit where the poorest people live, located in the south zone of Rio. Our guide in the favela was Xaolin who is the president of a local organization in Rocinha that fights for the rights of people in the favela. We were guest in Xaolin’s home, learning about how people in the favela live and the history of Rocinha that dates back to the 1920’s. Also we saw how reliant and self-sufficient the residents of Rocinha are. Every home and business was build by someone from the favela, creating partnerships to literary stack properties on top of one another. No one in the favela has to pay for their utilities, due in large part to the organizers in the favela like Xiaolin, who fought for these services. The city may provide the services, but the residents fight to keep them from being taken away. All of the plumbing and electrical wiring are laid and maintained by the residents, creating an amazing intricate infrastructure. Thousands of overhead wires known as “cats”  connect electricity to each property, the ingenuity of their system is incredible. We were fortunate to get to see the view from the top of Rocinha. A breathtaking sight that shows poverty at its highest level, as well as height of wealth — at the base of the mountain near the cost is one of the most affluent areas of the city. So close in space but miles apart economically.
“Once in a lifetime”, that was what I keep telling myself during this journey. In Brazil I found struggle, but more importantly I found beauty, friendship, spirituality and a true love for humanity. I will carry these lessons with me for the rest of my life and I hope to be able to share them with everyone that I know.